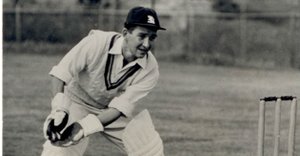 Past Player Profiles 1 of 6

Roy Swetman was a brilliant wicket-keeper/batsman who represented Addiscombe CC between the late-1940s to 1960s.

He became well-known in schools cricket circles and in 1948 captained London Schools and Home Counties Schools. He signed for Surrey but was able to play for Addiscombe on the weekends.

He debuted for Addiscombe's 1st XI in 1949 against Weybridge. He was just 15. As well as wicket-keeping, he opened the batting to great effect. Incidentally, his opening partner that day, Clive Dring , who would later play for Kent, was also just 15.

He was a consistently successful batsmen at the top of the order and in 1951 made 154 for the 1st XI. In 1952, he played against Addiscombe at Sandilands for an RAF XI in a star-studded team which included England players Fred Titus, Jim Parks and 'Fiery' Fred Trueman.

Roy was in the mould of the typical 'keeper of those days such as England's Godfrey Evans and Alan Knott. Roy was short and incred