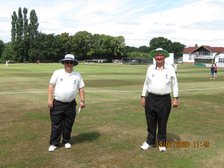 The league season is over but one last weekend of cricket

Thanks to all players, captains and supporters and especially Lin Poulton and Ray Munn who scored for us and Wildy, Gavin Mander and Steve Maguire who umpired and Sue and Darren who got the bar up and running
Roger Hurrion, Chairman

The league season might be over but cricket still goes on at Addiscombe this weekend,
in what will be final round up of activities at the club.

The weather is set to be fair for the weekend with gentle breezes and sunny intervals, temperatures rising to 23 degrees and only 3% chance of rain. So should be a good weekend!

THIS WEEKEND
The first of this weekend’s activities is the intra- club match between the 3s and the 4s starting at Sandilands at 12 noon. The bar will be open from 1 pm.

The second event is our charity 6 a sides for the Burton-Carter Cup, starting at 9 am in which the club is supporting two charities, NHS Charitable Trust and MENCAP. All proceeds from the event will go to these two organisations. A cash raffle and barbecue will be running during the day, with card transactions for bar purchases.

Sue and Darren have donated all the food. Many thanks to you both.
The menu will be; from 11.30-12 ish, pulled pork buns with coleslaw, and from 5.30 ish, jerk chicken with rice and peas. A veggie option is available. Cost £5 cash per portion.

Fuller accounts of all the matches can be found here. The ones lost by 85 runs to a Purley side that clinched the title by winning the game and unfortunately the twos lost as well. However the threes and fours both notched up wins, which for the fours
included a magnificent innings of 85 not out by Tristan Dennis, including 5 sixes. Welcome back Tristan, more to be seen next season!

Unfortunately the Adders lost their final game of the season against Sanderstead, but a great effort in getting a fifth club side out so regularly during this shortened season.
In our friendly on the Sunday against Trinity Mid Whits, we also managed to finish with a win.

WELL DONE & THANKS
Despite the unusual circumstances this year there has been an huge effort and willingness amongst all to get games on and cricket played. For such a short season a good number of games have been played in a variety of competitions both competitive and friendly, at senior and junior levels.

Well done everyone, thanks to all players, captains, supporters, Lin Poulton and Ray Munn who scored for us and Wildy, Steve Maguire (pictured above) and Gavin Mander, who umpired, and Sue and Darren who got the bar up and running for us to enjoy the sociable side of cricket.

Best wishes, see you up at the club over the weekend,
Roger