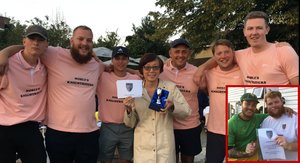 I wanted to share the good news about our successful first 6-a -side tournament for the Burton- Carter Cup.

The weather was extremely good throughout the day, which helped everything run smoothly. The eventual winners of the Burton-Carter Cup were Noble’s Knightriders, beating Armstrong’s Assassins in the final. Lai Burton was present to award the trophy to the winning team, which was a replica of the Ashes urn.

The whole idea behind the event was to raise money for two local charities, which this year were Croydon NHS Charitable Trust and the local branch of MENCAP. With everybody’s efforts about £2,300 was raised to share between the two charities.

A big thank you to all those organisations and individuals who donated raffle prizes. To Sue and Darren for providing the barbecue and their bar staff for running the bar throughout the day. Our umpires, Wildy and Gavin Mander, and Rochie, Jon Kuhrt and Charlie Wootton providing the organisational backup before and during the event. And to Lin Hurrion for tirelessly selling over £800 worth of raffle tickets!

And to all players, supporters and friends of the club who supported and helped make the whole day a success.