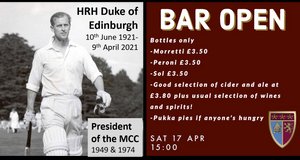 Our opening weekend of matches

'The club and players will observe a 2 minute silence at 3.00pm on Saturday in honour of HRH Duke of Edinburgh'

As the opening match of the season coincides with the funeral of Prince Philip, the club and players will observe a 2 minute silence at 3.00pm on Saturday.

Prince Philip was a keen cricketer and was the only person to hold the Presidency of the MCC twice, taking the position in 1949 and then later in 1974. It was as President of the MCC that he awarded Clive Lloyd the first World Cup after the West Indies beat Australia in the final of the first ever World Cup held at Lord's in 1975. Read more about the Prince's cricket connections.

Match fees
The match fees for all friendlies will be £5.00 per player. Could all players please ensure that they have this with them on match days.

We are not having teas at matches for the time being so it is likely that match fees will remain at this level for some time.