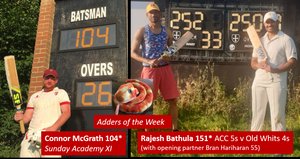 A tale of two centuries on a great weekend for ACC

It was a great weekend for Addiscombe with wins for the Saturday 2s, 3s, 4s, 5s and the Sunday Academy XI. The U13 Junior side won too!

Unusually, the Captains agreed a joint award of Adder of the Week due to two exceptional performances.

Adder of the Week 1:

The 5th XI had an incredible match against the 4th XI of local rivals Old Whitgiftians.

After conceding 250 off 40 overs, Addiscombe responded by reaching the target with no wickets lost. It was a phenomenal performance by the opening pair of Rajesh Bathula (in his first match for ACC) and Bran Hariharan.

Rajesh scored a brilliant 151 not out and is our first Adder of the Week. His captain, Ewan Macmillan said:

‘It was a classy innings of real quality. Glorious shots and a real batting maturity to reach a tough total against a league side. I am unlikely ever to see him again in my team again (it is like I've been here before...)’

And Rajesh responded to his award, saying:

‘The Captain believed in me which helped to push me to play to my full potential and finish things for the team.’

Adder of the Week 2:

The Sunday Academy played Old Rutlishians the next day at Sandilands. Old Ruts batted first and scored 182-3 off their 40 overs with Max Newark Symonds bowling particularly well with 2-30.

In response, Connor McGrath played brilliantly, dominating a 50 opening partnership with Danny Kuhrt before Ayoub Khan (38) joined him to take ACC close to the target.

Connor hit 14 fours and 3 sixes and ended unbeaten on 104*. His innings ensured ACC reached the target in just the 26th over.

‘It was a well-constructed innings. The way he batted was very ‘Bairstow-like’ and you could tell he was in the zone. Before he went in he said we was going to get his century and he is a man of his words. The innings was just want the team needed from him. Game recognises game!’

And Connor responded by saying:

‘Feels good putting up my first good score on the home wicket. Hopefully there will be more to come.’

Congratulations to Rajesh and Connor and to the others who contributed to wins last weekend.

Particular mention to Craig Stevens who scored 56 for the 2nd XI, Ayoub Khan who got 65 for the 3rd XI and Thiru Ramasamy who got 4-6 off 5 overs for the 4th XI.

Well played and Up the As!