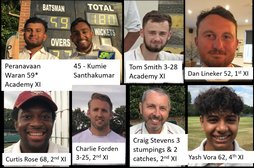 Mixed fortunes this week but 2s, Academy and Mitres all got great wins at Sandilands

The 2nd XI, Academy XI and Mitres all got great wins at Sandilands this weekend

Mixed fortunes for ACC this past week. The Mitres won their T20 Surrey Slam match on Thursday. But on Saturday the 2nd XI playing Old Whits, were the only team to register a win.

On Sunday, our Academy XI got a great win against Trinity Mid-Whits.

The Mitres won their match v Mitcham after needing 27 runs off the last 2 overs. Wickets were shared by the bowlers and then Matt Stratten top-scored with 38 with Kumie Santhakumar and Cameron Armstrong getting 20s before Rochie hit the winning boundary.

On Saturday, Dan Lineker top-scored for the 1st XI in their match at Old Whits with 52 with Lewis Noble also getting 38. Despite good bowling from James Ramsey, Barry Lineker and Scott Benham, Old Whits chased down the total for 6 wickets lost.

The 2nd XI had a great win against OWs at Sandilands. Curtis Rose continued his fine form with 68. ACC accelerated towards the end of their overs with good hitting from Kash and Ali Rajah. Then a great bowling performance limited OWs to 180. Charlie Forden was the pick of the bowlers with 3-25 and Craig Stevens claimed 5 dismissals as wicket-keeper with 3 stumpings and 2 catches.

The 3rd XI were bowled out for 135 which then OWs knocked off for 4 wickets lost. A number of batsman made starts but we did not have enough runs and despite decent bowling, OW cantered home.

The 4th XI had a tight game against Sanderstead. Chasing 170, they fell an agonising 6 runs short. 16 year old Yash Vora scored a superb 63 and showed his great potential.

The Adders , under new skipper Ewan MacMillan, faced a strong Sijungrammarians 4th team and did well to score 166 with Joe Ruddy top scoring down the order with 42*. But their batsman made short work of this total and they won by 8 wickets.

On Sunday, the Academy XI secured a great win against TMW. After a good bowling and fielding performance, Tom Smith getting 3-28, ACC chased down 180 with Waran scoring a superb 59* with great support from Kumie 45. It was the team’s first win after some tough matches and as the Chairman said to the team afterwards ‘You were a credit to club’.