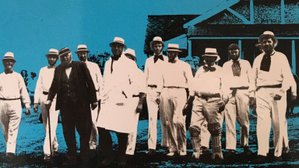 'By 1895 the club employed two professional bowlers, one of whom also worked as a groundsman'
'Addiscombe CC: a history'

Addiscombe Cricket Club has a great history. It began in the Victorian era in what was then the rural environment of Croydon and had two previous home grounds before settling in its current home at Sandilands.

The club survived two World Wars and has enjoyed many great moments over the last 150+ years.

Famous players such as Jack Hobbs, Fred Trueman, Ted Dexter and Derek Randall have all played at Sandilands. Two of our former players, Roy Swetman and Alan Butcher, have represented England in Test matches.

Have a read about our history in these instalments:

All of this history is drawn from Peter Stanley Williams’ book Addiscombe Cricket Club: a history which was published in 1990. We have a number of copies of the book available for a £5 donation to club funds.

We are currently compiling the story of the last 30 years to update this history to the current day so if you have any information or material which would be relevant please be in touch.