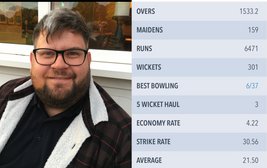 I have enjoyed playing at ACC because of the friendly and fun environment, on and off the pitch. I have made life-long friends, young and old...and some even older
Scott Benham

On the website Play Cricket all of the statistics from competitive matches over the last 15 years or so are recorded.

On the same week that James Anderson got his 600th Test wicket, Scott Benham got his 300th wicket for ACC. He has also scored over 4000 runs too…so we thought that was worth an interview...

So Scotty, how long you played for ACC?

I believe I have played for Addiscombe for 14 years

And what is your best ACC cricket memory?

I have had many great ACC memories. Playing at Lord’s and scoring 92 (yes I bottled the ton), getting my first century for the 1st team, getting promoted 3 years in a row and winning the league cup with the 1st team.

But my best memory would be when I got given the opportunity to be 1st team skipper which I had the pleasure of doing for 4 years until the wife put her foot down. She was fed up of me going to meetings, selection and training etc, so I had to give it up.

What was your best bowling performance?

My best bowling performance isn’t actually the game I took the most wickets in but was due to the significance of the game. It was when I bowled in the 1st team League Cup Final and I had figures of 4-8 off 5 overs with 3 maidens (must of been 2 very lucky boundaries for the runs). I was presented with the Man of the Match and the main thing was we won as well.

What advice would you give to young spin bowlers?

If I could give any advice to any young spinners is don’t mind getting hit for 6. It only means you are really in the game and when you get them out it makes it all that little bit more sweeter.

Who is your favourite Cricketer?

My favourite professional bowler has to be Shane Warne. What he could do with a ball was just incredible.

My favourite batsman has to be Marcus Trescothick. I just loved watching him bat.

And why have you enjoyed playing for the As?

I have enjoyed playing at ACC because of the friendly and fun environment, on and off the pitch. I have made life-long friends, young and old…and some even slightly older.

When I was one of the youngsters of the group along with Geebo and Steve Cox, I had the pleasure of playing with some great players like Crowie, Jonno, Adnan, Ben Cox, Mr Crocombe and obviously Poults (Andy Poulton) who I owe a lot of my playing time at Addiscombe to. They made my start to 1st team cricket very enjoyable and we had some great times and made some great memories.

I now have the pleasure of playing with some of my closest mates like Buggz, Starnsey, Noble, Dhondi and too many others to mention. I am grateful for all the good times we have.

I would urge anyone who is thinking about joining or getting involved in a club to come down to ACC and be part of an enjoyable and friendly club.

Thanks Scotty. Like Jimmy Anderson, we are sure there is plenty left in the tank so here's to many more wickets!