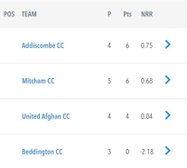 Better weather for a weekend feast of local derby matches

'On Thursday night, Addiscombe Mitres, captained by Dan Lineker, beat Mitcham by 5 wickets with one ball to spare. This result puts us top of our Surrey Slam league
Roger Hurrion, Chairman

The weather
Much brighter weather today and a great improvement on last Saturday. Weather prospects for today are sunny intervals with a moderate breeze, temperatures 14 to 24 degrees, with only 8% chance of rain. Good day to see some cricket played, and only three weeks left of this very short season.

Last week
Last week’s games were very much affected by the weather with the first and third teams games being called off without a ball being bowled. The twos and fours travelled to Cheam and did manage to get a T20 game in despite the weather, but both teams lost unfortunately.

In the twos, Cheam scored 148 for 4 and managed to bowl out Addiscombe for 18.

During the match Jack Southwell received a straight drive to the face off his bowling, which resulted in a visit to hospital, with mild concussion and a fractured cheek bone. Many thanks to Gavin Mander who took Jack to hospital, and Jon Kuhrt who took over the nursing duties. I spoke to Jack the following day and he was in good spirits, but no more cricket for him this season. Lovely picture of Jack with injury and interview on the website. Some people will do anything for a five minute claim to fame!

Despite a good partnership between father and son Vinay Malholtra 44 n.o. and Nikhil 30, with Addiscombe making 149 off 20 overs, Addiscombe fell to defeat by
36 runs.

The return of the Adders at Sanderstead, on the new artificial pitch, saw a debut 64 n.o. from Connor McGrath, 31 from Martin Stone and 37 from Irshad Ramzad
but a total of 158 was not enough as Sanderstead raced off and won by 7 wickets.
To complete a weekend of losses our Academy XI went down to Old Ruts on the Sunday.

However all was not lost for the week. On Thursday night Addiscombe Mitres, captained by Dan Lineker, went into action in the Surrey Slam at Sandilands against Mitcham. Mitcham 140 all out in 18.1 overs, ACC Mitres 142 for 5 in 19.5 overs, winning by 5 wickets, and putting us top of the table (as you can see from the photo above). Well done lads, great result!

This week
This week’s round of matches see three of our teams engaged with contests against neighbours Old Whits. Our ones and threes being at Old Whits, with the twos hosting them at Sandilands.

The fours are playing Sanderstead at 1743. The Adders are playing again, a 5th eleven out 3 weeks in a row, travelling away to play Sinjungrammarians. All matches I believe to start at 1 pm unless individual teams have re-arranged for an earlier start time.

On Sunday, the Academy XI have a home match at Sandilands tomorrow starting at 1.30 pm. The bar will be open from 3pm to 8.30 pm. The Under 13s have a match in the morning at 9 am. Good luck to all the captains and players in this weekends matches.

Weather-related damage
The high winds yesterday caused a little damage up at the ground with a lot of debris coming down from the trees, and a very large limb falling onto the outfield, partly still hanging from the tree, but safely removed by Ari Sathiyajit and myself at junior training last night. Also two tennis club members rescued two of our covers that had been lifted and blown over each other. Many thanks chaps.

6-a-side tournament
Lastly today to end the Chatter, don’t forget about our charity six a side competition for the Burton – Carter Trophy , scheduled for 12th or 13th of September. All details here.

See you up at the club today, enjoy the cricket and your weekend.