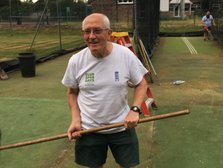 THE WEATHER!
A very damp morning to wake up to this morning and not a very good outlook for the day.

Temperatures 11 to 17 degrees, with light cloud and breeze. 34% chance of rain this morning, dropping away down to 12% as the day progresses but rising again as the afternoon changes to evening.

How much cricket we shall see today I think remains doubtful, but fingers crossed.

Other notable performances, in the ones, Dan Lineker 52, Lewis Noble 38, in the fours Yash Vora scored 62 in a very tight game which saw Sanderstead just winning by 6 runs. The Adders lost to Sinjungrammarians in their friendly match despite Joe Ruddy being 42 n.o.

In our Academy game on the Sunday, there was a great win over Trinity Mid Whits, with Kumie scoring 45 and Warans 59 n.o.and Tom Smith taking 3 for 28.

Our Surrey Slam game on Thursday against Afghan Utd was cancelled due to the weather.

THIS WEEK
Today's matches sees all four Championship sides taking on Streatham and Marlborough, with the ones and threes at S&M, twos at Sandilands and fours at Addington 1743. All matches have a 1pm start. The Adders are also out again, this time travelling
for a friendly match against Woodmansterne.

On Sunday the Development team are away to Purley, 1.30 pm start and our under 11s
have a match at Sandilands, with the under 12s playing at 1743, both at 9 am.

On Tuesday there will be a Surrey Slam re-arranged game against Afghan Utd at Sandilands, 5.30 pm. The bar will be open.

OTHER CLUB NEWS
We seemed to have been plagued with injuries lately, but I’m glad to say that Charlie Fordan is back after hamstring pull, and Jack Southwell has recovered from his facial injury enough to be given the ok to play again. Unfortunately our club captain James Ramsey suffered a side strain injury in the last match and faces being out for a number of weeks. Rochie has also picked up a dislocated finger. We wish them both a quick recovery.

Thanks also to Ali Rajah who helped me last Wednesday to repair the sides and back of our nets netting, where some individuals had seen fit to cut through every cable tie securing the netting, in order to gain access to the nets when the gates were locked.

Lastly don’t forget our Charity 6 a side competition with BBQ on Sunday 13th September, for the Burton-Carter Cup, details for entry are on the website, as are further details of all matches.

Hope to see you up at the club.