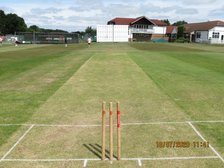 In this short and strange season, selection has never been a problem and team spirit has always been high and we can all feel justly proud of how our players have represented the club
Roger Hurrion MBE, Chairman

THE WEATHER
Weather offerings from the BBC for Croydon today; sunny intervals with gentle breezes, temperature 9 to 18 degrees, with 6 to 8% chance of rain. So good chance of cricket today.

LAST WEEK
Results last week, on Saturday and during the week brought us again a mixed bag, but some good cricket played and good individual performances.

In the Championship we were playing a full set against Streatham and Marlborough, but unfortunately the fours lost their game to the weather, so were unable to play. The threes lost by 45 runs.

The first team won by 5 wickets, with some great bowling performances. Chris Hurrion 3 for 22, Charlie Forden 4 for 28 and Baz Lineker 8 overs for 14 runs. Curtis Rose, August player of the month was again handy with the bat and Alex Roberts was 31 n.o.

The twos had a rare result, with the match actually being tied, in a nail biting finish. Good batting performances from Kash Hassan 62, Rochie 33, and Starnsey 35.

The Adders were away to Woodmansterne, bowling them out for 126, with the Adders needing 8 runs off the last 10 balls but Al Wildsmith and Saju Ragueelan
saw the team over the line.

On Sunday the Academy side played Purley in their last game of the season losing by 7 wickets despite Paravan Warans scoring 61 and Jared Cruickshank bowling 5 overs at 0 for 6.

On Tuesday in the Surrey Slam the Mitres lost by 40 runs to the Afghan Utd team, which meant that we did not go through to the next rounds of the competition. More details of the matches as usual can be found here.

THIS WEEK
Today’s games see the last week of the Surrey Championship competition in what has been a very short and strange season due to the pandemic, with none of our teams in contention for a winning spot but playing none the less to do their best for Addiscombe CC.

Selection for games has never been a problem and team spirit has always been high, and I think we can all feel justly proud how our players have represented the club.

So to finish off the season we have another full set, this time against Purley. The ones are at Sandilands with a 12 noon start and the twos are at Cricket for Change, Wallington again with a 12 noon start. Due to grounds problems that Purley are experiencing at present, with the help of Graham Jones and Addington 1743, both the threes and fours matches will be staged at 1743. Both games will be 30 overs a side, with the third team match starting at 10 am and the fourth team at 2.30 pm. The Adders are out again, playing Sanderstead away with a 1 pm start.

Good luck to all teams.

On Sunday at Sandilands, the U13s have a match starting at 9am. In the afternoon at 1pm there is an Addiscombe XI playing Trinity Mid Whits. The bar will be open.

In the coming week, there will be an inter club match at Sandilands on the Saturday 1pm. Followed on Sunday by the Charity 6 a Sides for the Burton- Carter Cup. The bar will be open both days. On the Sunday Darren and Sue are putting on a BBQ throughout the event.

Friday night colts training will be continuing, weather permitting throughout September
but starting at 6pm.

Enjoy today’s cricket, and hope to see you up at the club.