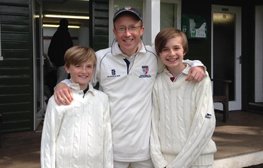 Nickname: Mainly 'Kuhrty' but some at the club used to call me ‘Jon the Baptist’...

How would you describe yourself as a player? The older I get the more of a nudger and nurdler I become. All my runs now come behind square.

How long have you played at Addiscombe? I first joined the colts in 1986 aged 14 along with school mates Andrew Bellwood and Nick Terrell. A year later we won the League and the Surrey Cup and played at the Oval. Great days.

In the late 1990s, I captained the 3s along with fellow gingers Andrews Ryland and Bellwood. Then after a 12 year gap I came back when my 2 boys started with the colts. My old primary school teacher (Roger Hurrion, MBE) twisted my arm to manage their colts team. I always do what Roger tells me.

What is your best cricketing memory?
In 1990 I got my first 100 for ACC and a quick 82 at Horsham that I remember well.

But my best memories come from playing matches with my best mates and especially more lately with my sons. One game v Old Mid-Whits stands out - I got some runs and then my sons both bowled well to secure a narrow win. It was tense and hotly contested and experiencing that with your sons is very special.

What is your most embarrassing moment on a cricket pitch? In 2017 we batted first in a top of the table clash v Dorking. In my frustration at our batting collapse, I kicked the leg of an old plastic chair next to me, thinking it would just shift a bit or fall over. But the chair leg flew clean off and landed ten yards away. This coincided with the whole of their team walking back towards the pavilion as the innings had ended. Their captain was (understandably) not happy seeing the opposition skipper damage their club property and gave me a right piece of his mind in front of everyone. It was so embarrassing. I ended up apologising to their whole dressing room - and giving them a tenner for the chair.

However, our whole team found it completely hilarious. They brought back the offending chair leg to the bar like a trophy after we won the match. Jack Southwell said it was the best thing I had done all season.

If you could be any player, past or present, who would it be? Ian Botham, no doubt about it. I loved everything about how he played the game.

Favourite format to watch: T20s are McDonalds, ODIs are Nandos but a Test is a Michelin-starred restaurant.

Predictions for Addiscombe's 2020 season: If we have good availability in the 1st and 2nd XIs then we will have a good season. It all filters down and means the 4th XI are not scrabbling around for players.

Why is Addiscombe CC a great club to join? I love the fact that ACC is not a snobby club. We have great facilities and massive potential.

Jon wrote an article last year for 'The Cricketer Magazine' called 'What game even is that? Two factors to save cricket's future'